The contemporary Irish abstract painter Francis Tansey was born in Dublin in 1959. He studied at the National College of Art and Design in (1978-1983). Specialising in abstract art, in 1985 he became the first Artist in Residence, at Butler Gallery, County kilkenny, where his brightly coloured geometric acrylic painting caused great interest.

When the internationally acclaimed abstract artist Sean Scully saw Tansey’s work exhibited for the first time in a 1983 NCAD Degree Show, he called Tansey one of the most exciting prospects in Irish art.

In their expression of spacial relationships and juxtapositioning of colour, they have several characteristics in common with the Abstract Expressionists Mondrian and Rothko.

Since he began painting full-time, Francis Tansey has shown his works in numerous solo and group exhibitions, and his work is in the collections of the Ulster Museum, the Arts Council of Ireland, Jefferson Smurfit Group, AIB and many other corporate and private collections.

The contemporary Irish abstract landscape artist and genre scene painter John Shinnors was born in Limerick in 1950. He studied drawing and fine art painting at the Limerick School of Art and Design, and during his career has enjoyed regular solo exhibitions throughout Ireland as well as a wide range of group exhibitions. He is a member of Aosdana.

As a painter, John Shinnors is primarily a landscape artist whose focus has become increasingly abstract. Typically, he creates several preliminary watercolour studies before executing his large scale oil painting works, usually on stretched linen or cotton. His paintings, which also include interior scenes, exhibit rich chiaroscuro qualities and dramatic contrasts between light and dark.

John Shinnors’ work is represented in many public and private collections such as: Arts Council of Ireland; National Self Portrait Collection, University of Limerick; Office of Public Works; AIB (Allied Irish Banks); Ulster Museum, Belfast; Limerick City Gallery of Art (includes National Collection of Contemporary Drawing). He was the subject of the RTÉ1 documentary “Split Image John Shinnors”. He is also involved in the promotion of the arts through the Shinnors Scholarship. He lives and works in Limerick.

The highest price paid at auction for a painting by John Shinnors was recorded in 2008, when his work, entitled Estuary Forms – Limerick, was sold at Morgan O’Driscoll, in Co Cork, for €70,000.

The Irish Cubist painter and stained glass artist Evie Hone was born in Dublin. One of the earliest abstract painters in the history of Irish art, she was the great-great-great granddaughter of Joseph Hone, a brother of the portrait painter Nathaniel Hone the Elder RA (1718-1784) and father of two other portraitists Horace Hone (1756-1825) and John Camillus Hone (1759-1836). Struck by infantile paralysis, Evie suffered from lameness the rest of her life.

After studying drawing and painting at the Byam Shaw School of Art in London, Evie Hone continued her studies at the Westminster School of Art under Walter Sickert (1860-1942), where she met her lifelong friend and fellow artist Mainie Jellett (1897-1944).

From London, the pair continued studying in France, first under Andre Lhote, then under Albert Gleizes, the great Cubist theorist. At this time, Evie Hone concerned herself with portraits, landscapes and (increasingly) abstract pictures.

Returning home, Hone and Jellett held a joint exhibition at the Dublin Painters Gallery, largely featuring their new and highly abstract art. The critics were not impressed with the non-representational qualities of the paintings displayed, and were baffled by their abstraction.

After a short break, Evie Hone continued studying with Gleizes. Both she and Jellett joined the Abstraction-Creation group of artists, who specialized in geometric abstraction – or, concrete art – and had their paintings published in the group’s Parisian magazine. Both Irish artists then submitted their paintings to the Salon d’Automne, the Salon des Surindependants and the Salon des Independants. Evie also submitted to the Water Colour Society of Ireland (WCSI) and during the years 1930-1945 had more than 40 works displayed. Of these, roughly 15 were for stained glass.

From hereon, Evie’s main artistic preoccupation was with stained glass art. She first joined Sarah Purser’s studio – the stained glass co-operative An Túr Gloine – before setting up a studio of her own in Rathfarnham and becoming influenced by the great Harry Clarke.

Over the next twenty years, she undertook a number of commissions and left an impressive legacy of artwork in this genre. Evie Hone’s most important works are the Crucifixion and Last Supper windows at Eton Chapel, Windsor (1949-1952) and “My Four Green Fields”, now located in Government Buildings.

Evie Hone was a founder member of the Irish Exhibition of Living Art (IELA). In 1958, University College Dublin staged a memorial exhibition of her Irish painting, drawing and stained glass designs, which attracted a record attendance. In 2005-6, the National Gallery of Ireland held an exhibition of her works.

The auction record for a work by Evie Hone was set in 2005, when one of her stained glass masterpieces – entitled, Stations of the Cross, for Kiltullagh Church, County Galway – was sold at Whyte’s, in Dublin, for €42,000. 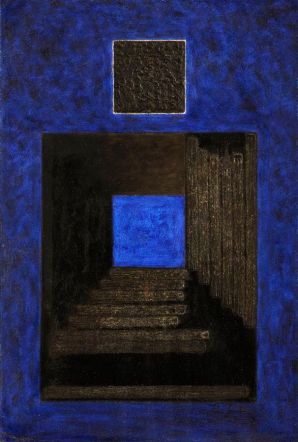 The contemporary abstract painter Felim Egan was born in Strabane, County Tyrone in 1952. He studied painting and drawing in Belfast and Portsmouth before attending the Slade School of Fine Art in London, after which he began exhibiting in the late 1970s. He also studied for 12 months at the British School at Rome in 1980 before returning to Dublin. One of Ireland’s most respected exponents of abstract art, his paintings are carefully built up in layers of thin colour with stone powder ground into the acrylic. His visual vocabulary includes the use of hieroglyphic-type motifs over monochromatic areas of colour, evoking long horizons, big skies and empty sands.

Felim Egan represented Ireland at the Paris Biennale in 1980 and the Sao Paulo Biennale in 1985, and has enjoyed more than 55 solo shows throughout Europe and the USA since 1979. Major exhibitions of his artworks were held at the Whitworth Art Gallery, Manchester and the Irish Museum of Modern Art, Dublin in 1995-96, and at the Stedelijk Museum, Amsterdam in 1999. He was awarded the Premier UNESCO Prize for the Arts in Paris in 1983, and in 1997 he received the Gold Award at Cagnes-sur-Mer. Egan has received several large scale commissions, including works for Dublin Castle and the National Gallery of Ireland. In addition, he recently completed a large scale sculpture at Cork Street, Dublin, October 2005. He is also a member of Aosdana. 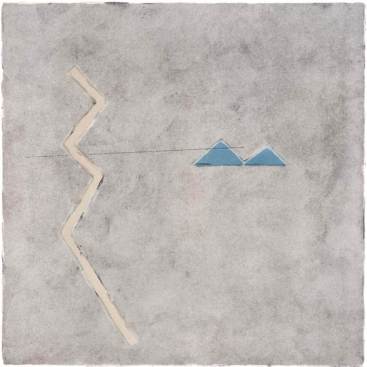 The auction record for a work by Felim Egan was set in 2007, when his abstract painting, entitled Intertidal Note, was sold at DeVeres, in Dublin, for €19,500. 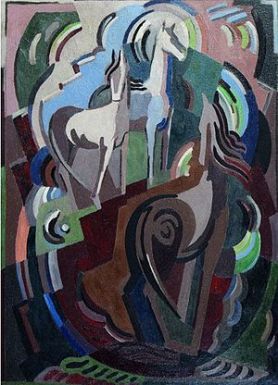 The abstract artist and figure painter Mainie Jellett was born in Dublin. She studied drawing and fine art painting at the National College of Art in Dublin and under Walter Sickert at the Westminster Art School in London. It was in London that she met her lifelong friend and fellow artist Evie Hone.

Jellett had precocious talent as a painter, and while starting out as a follower of Impressionism she began – as a result of her association with the Parisian abstract painter and teacher Albert Gleizes – to develop a greater interest in modern abstract art like Cubism. Along with Evie Hone and Mary Swanzy, Jellett was one of the earliest abstract painters in the history of Irish art.

In 1923, together with a like-minded Evie Hone, she staged one of the first abstract painting exhibitions seen in Ireland at the Society of Dublin Painters. While the critics were horrified at the evident lack of “representational art”, later art experts acknowledge Jellett’s role in helping to maintain contact between European and Irish art.

Mainie Jellet continued to paint in the abstract Cubist style and to exhibit. WB Yeats opened one of her exhibitions in 1926 at the Dublin Radical Club, while she again exhibited at the Dublin Painters Gallery in 1926, 1927, 1928 and 1929. In addition, she exhibited abroad several times during the 1920s: in Paris, Versailles, Brussels, London (with the London Group), and Amsterdam.

From 1930-1937, she showed at the Royal Hibernian Academy (RHA). From 1931, she also exhibited with the Water Colour Society of Ireland (WCSI), showing over 45 paintings from 1931-1943. More exhibitions followed, at the Gate Theatre and St Stephens Green.

Throughout the 1930s she wrote about and taught art – the latter in both Dublin and Cork – playing an important role in the history of Irish painting, as an early proponent of abstraction in art and as a champion of the modern movement.

Although Jellett’s pictures were often attacked critically, she proved eloquent in defence of her ideas. Her resilience may have been due to her firm Christian beliefs. Indeed, a number of her paintings, though quite abstract, have religious titles and are similar to icons in tone and palate. Along with Evie Hone, Louis le Brocquy, Jack Hanlon and Norah McGuinness, Jellett helped found the Irish Exhibition of Living Art in 1943. She died a year later, aged 47.

The auction record for a work by Mainie Jellett was set in 2006, when her oil painting, entitled Abstract Composition, was sold at Sotheby’s, in London, for £84,000.