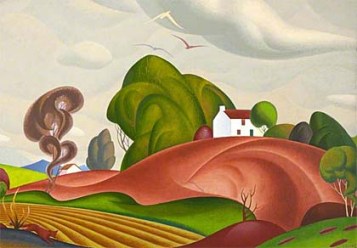 The Irish landscape artist and figurative painter John Luke was born in Belfast and worked in a shipyard and Flax Mill before taking night classes at the Belfast School of Art. There, he won a scholarship and the following year a prize in a Royal Dublin Society competition which led him to travel to London to study fine art painting, drawing and sculpture at the Slade School of Art under Henry Tonks. The artists Tom Carr and F. E. McWilliam were his contemporaries at the time. After exhibiting at the Redfern Galleries in London, he completed a mural for a travel company, spending the proceeds on a trip to Paris. After this, he took evening classes in figure painting at the Westminster School of Art under Walter Bayes and showed at the Leger Gallery.

In 1931 he returned to Belfast. By now, landscape painting was his dominant interest. In 1933 he exhibited with the Northern Ireland Guild of Artists. More exhibitions followed, in Belfast and at the Royal Hibernian Academy (RHA) in Dublin. In 1938 he assisted in the painting of a frieze for the Ulster Pavilion in the Empire Exhibition in Glasgow. The following year he represented Northern Ireland at the New York World Fair. During WWII Luke stopped painting for a spell and retired to a cottage in County Armagh, earning his living by teaching art at Manor House school.

In 1946, Luke had a solo exhibition of his oil and tempera paintings at the Belfast Museum and Art Gallery: a total of 85 artworks including four sculptures. In 1947 John Luke’s work was included at an exhibition of noted Ulster artists in London. Then, in 1948, the Northern Ireland Council For Encouragement of Music and The Arts (CEMA), the forerunner of the arts council of Northern Ireland, held a retrospective for Luke in Belfast. In 1951, Luke painted a mural for the Festival of Britain in his characteristically, formalized style. There is another mural of his in the Masonic Hall, Rosemary Street, Belfast, and an oil The Old Callan Bridge in the County Museum, Armagh. From 1953 he lectured at Belfast College of Art.

John Luke spent his final years – after the death of his mother – in relative poverty in a flat in Duncairn Gardens, Belfast, and died in the Mater Hospital in 1975. The following year, the Arts Council of Ireland mounted an extensive exhibition of his work at the Ulster Museum and the Douglas Hyde Gallery in Dublin. His artworks appear in several public and private collections, including: Ulster Museum, Belfast; County Museum, Armagh; Queen’s University Belfast; and many more.

The highest price paid at auction for a painting by John Luke was recorded in 1999, when his landscape, entitled The Bridge, was sold at Christie’s, in London, for £41,500.

An influential exponent of contemporary  Irish sculpture during the late 20th century, Conor Fallon was strongly influenced by the artist Toney O’Malley and the St Ives group of artists in Cornwell where he lived for some time. His most recognizable works were large steel sculptures of birds, hares, horses and fish.

Fallon was born in Dublin in 1939, one of six sons to the poet Padraic Fallon. The family soon moved to Wexford where the children shared the management of the farm, while their father worked as a customs official. The house was always full of visitors including writers, musicians and painters. As a child Fallon was fascinated by wildlife, especially birds, and often copied pictures from Archibald Thornburn s Book of Birds. He recalled later that his older brother Brian (who became an Art and Literary critic for the Irish Times) was a significant influence on him by introducing him to stories from the Odyssey.

Fallon was accepted into Trinity College, Dublin to study natural science. But on the advice of a perceptive professor, Fallon soon left Trinity and turned his attention to fine art. His father was horrified because he believed his son’s paintings to be ‘dreadful’. Ever practical, Fallon worked as an accountant during the day to earn a wage, and studied art by night. His early acrylic and gouache landscapes show strong influences ofJack B Yeats.

In 1964 Fallon went to St Ives to see the artist Tony O’Malley, who was a family friend and had settled there a few years previously. He had hoped to study with the abstract landscapist Peter Lanyon, but on the day of his arrival, Lanyon died from injuries he received in a hand gliding accident. Instead, Fallon was introduced to a pupil of Lanyon – the artist Nancy Wynne-Jones, who was 15 years his senior. They felt an instant connection and were married in 1966. By this time, he had become disillusioned with his paintings, most of which he destroyed.

A turning point in his career came when he was introduced to the sculptors Denis Mitchell and Breon O’Casey who took Fallon under their wing. Mitchell in particular instilled a disciplined work ethic in Fallon, insisting that the last 100th of an inch was essential to the integrity of a piece. When Fallon created an Owl In Aluminium (1969) Mitchell advised him to specialize in sculpture.

Although Fallon initially gained recognition for his smaller sculptures of birds, he later confessed he was unable to see how he could convert them into public sculptures without the risk of distortion. He eventually became better known for his large scale steel sculptures, mainly commissioned for public places such as Enniscorthy Bridge (The Singing Bird, (1993) the Bank of Ireland Centre, Independent Newspapers at Citywest, St Patricks Hospital and University College Cork. His works have a sleek, spare beauty with clean lines. He was also influenced by Cubism, which he considered ‘the’ development in the art of the 20th century. He was also influenced by the Romanian Sculptor Constantin Brancusi, as well as early Greek and Egyptian carved figure sculpture.

Fallon was awarded the Oireachtas Gold Medal for Sculpture in 1980, he was elected to Aosdana in 1984, and he became an Associate Member of the Royal Hibernian Academy in 1981 and a full Member in 1989. He was awarded an Honorary Degree from the National College of Art and Design in 1993.

He died within one year of the death of his beloved wife Nancy, in County Wicklow, and is survived by their 2 children.